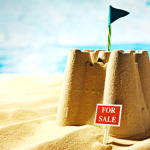 After the housing crisis in 2009, San Diego experienced a strong rebounded. Over the course of the last few years, the area has seen growth in just about every sector of its housing industry – home values have gone up, demand has skyrocketed, and construction has been revitalized.

As of recently, however, the torrid pace of San Diego’s real estate market has begun to cool off. Low inventory, high prices, and rising interest rates have all contributed to slowed growth in the area’s housing sector over the past few months.

According to a DataQuick report released Tuesday, San Diego County’s median home sale price rose to $450,000 this June. Compared to June 2013, that represents an 8 percent increase. However, even though last month’s numbers hit a seven-year high, the overall growth in the market hasn’t been quite as strong.

As the months have gone by, the pace of appreciation in San Diego’s housing market has slowed considerably. In the summer of 2013, the annual market growth was three times what it is now – from June 2012 to June 2013, median values for home prices in San Diego were up 24.1 percent.

“Last year everyone wanted to know why prices were rising so fast, and the three main reasons were extraordinarily low inventory, incredibly low mortgage rates, and record or near record levels of investor purchases,” DataQuick analyst Andrew LePage explained. “This year each one of those has sort of reversed to some extent.

One factor contributing to the slowed growth in San Diego’s housing market has been the rise in interest rates. In the first half of 2013, interest rates for a 30-year fixed rate mortgage sat around 3.5 percent. Now, mortgage rates are up to 4.3 percent. Because of the rise in rates, the number of transactions in San Diego County fell by 23,344, or 11 percent, in the first half of this year.

Another reason for San Diego’s slow market growth is the availability of housing. Inventory, which is still constrained, has increased over the months. In the first half of 2014, there were 46,146 active listings in San Diego County, which is up from 26,294 last year. Additionally, this month also happened to be the first time inventory surpassed 8,000 since February 2012.

Even though the market has slowed up a bit, there isn’t any reason to worry. According to local experts, the recent housing data simply represents a return to normalcy. Mark Goldman, a loan officer and real estate lecturer at San Diego State University, said this year might be a bit of a hangover from the price run-up in 2013. “It’s better this summer but the first quarter of this year was unexpectedly slow,” Goldman said. “Maybe it was just taking a breath.”

As has been the trend, San Diego’s foreclosure rate continues to fall.

Last month, lenders foreclosed on just 134 properties in San Diego County. That’s seven fewer than in May, and is down from the 153 properties repossessed in June 2013. According to DataQuick, this month’s numbers, which represent a nearly eight-year low, were the fewest the county has seen since there were 134 in August 2006. At the height of the housing crisis, San Diego saw foreclosure rates as high as 2,000 a month.