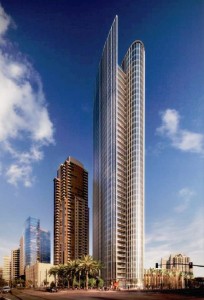 It’s FINALLY official! The Bosa Tower has a name: Pacific Gate. For the first time, Bosa Development asked the public to name one of its infamous projects. The naming contest went on for weeks with individuals submitting names for the new 41-story high-rise tower under construction south of Broadway at Pacific Highway. On Friday, July 17, 2015, Kevin Flanagan was announced as the winner of the naming contest and was awarded the $5,000 prize. Flanagan has lived in San Diego for over 30 years and resides near Balboa Park.

“We feel Pacific Gate represents our vision for the building, being a symbol for the city’s future, punctuating the skyline with its iconic architecture and leading the ambitious movement toward an even more dynamic downtown,” shared Nat Bosa, Bosa Development President.

The crane has gone up and construction continues for this 450-foot-tall project. This downtown San Diego luxury high-rise condominium is expected to be the most luxurious building in San Diego, featuring 217 condo residences and overlooking the waterfront in the heart of Downtown San Diego. While under construction, the Bosa project will be opening the ReThink Downtown Gallery later this summer which will feature a museum style exhibition sharing the design and architecture of the history and the future of the urbanization of Downtown San Diego. Early this Fall, the Gallery will also feature scale models and construction progress on the Pacific Gate project. Want to stay tuned on all of the news?

We have arranged with Bosa for a sneak preview of the Pacific Gate floor plans, amenities and updates. Join our Mailing List below to hear the news First and receive VIP Access into our Exclusive Preview Party!