A Summer in Review 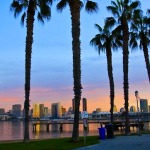 In San Diego, summertime is usually considered to be a peak buying season. However, this year, the pace of home price appreciation showed signs of slowing during the summer months.

The S&P / Case-Shiller Home Price Index, which has a lag time of two months, showed that from July 2013 to July 2014, home prices in San Diego County rose 8.3 percent. While that seems like a decent rate of appreciation, it’s down from the 10.2 percent annual gain we saw in June. Overall, San Diego’s real estate market has been slowing since August of 2013, when foreclosure resales pushed annual appreciation to 21.5 percent.

“It was kind of an outlier in terms of typical summer activity,” said Mark Goldman, a loan officer and real estate lecturer at San Diego State University. “We had very low inventory and yet prices were still very soft.”

As you might expect, the slowdown in annual appreciation wasn’t limited to San Diego. Of the 20 cities tracked by S&P / Case-Shiller, 19 experienced slowed annual growth. In total, the 20-city composite value rose 6.7 percent from July 2013 to July 2014, which was down from June’s rate of 8.1 percent. Historically, July represented the slowest annual nationwide gain since November of 2012.

Even though annual appreciation has slowed, the real estate market is still on solid footing. David Blitzer, chair of the Index Committee at S&P Dow Jones, pointed out that home prices are still rising at rates that are two to three times the rate of inflation. “The broad-based deceleration in home prices continued in the most recent data,” Blitzer said in a statement. “The slower pace of home price appreciation is consistent with most of the other housing data on housing starts and home sales. The rise in August new home sales – which are not covered by the S&P / Case-Shiller indices – is a welcome exception to recent trends.”

According to many experts, the fall in annual appreciation rates represents a return to normalcy for the San Diego real estate market. Jordan Levine, director of economic research at Beacon Economics, said he expects annual gains to eventually level off at rate of about 5 percent. “Double digit gains can’t be sustained indefinitely in the absence of double digit growth in incomes,” Levine explained. “The mix of homes being sold obviously played into those kind of inflated growth rates that we’ve been seeing in the last couple of years. We went from a period of many, many foreclosures to a time of less foreclosures.”

Although annual growth may have slowed this year, home prices in San Diego did experience small gains throughout the summer. In San Diego County, home prices rose 0.3 percent from June to July. CoreLogic DataQuick, a real estate tracking service, reported that the median home sold in July went for $445,000. Compared to 2013, that represents a 6.6 percent increase.

Despite its relatively slow summer, San Diego still managed to lead the pack in terms of annual price appreciation. According to data from S&P / Case-Shiller, San Diego’s annual gains ranked it fifth behind Las Vegas, Miami, San Francisco, and Detroit.