At Greater Good Realty, we think it’s important to give to back to our community. To us, the real estate business isn’t just about selling homes, it’s about helping people. So, with that in mind, we try to do whatever we can to help make San Diego a more enjoyable place to live.

Every year, we donate 10% of our commissions to various charitable and nonprofit organizations throughout the San Diego area. Last year, we had the pleasure of sponsoring Mama’s Kitchen, a tax-exempt 501(c)(3) not-for-profit organization. This past weekend, we got the chance to work with the San Diego-based organization yet again, joining them for a fundraising event called Mama’s Day.

In 1990, Laurie Leonard founded Mama’s Kitchen as a way to provide home-cooked meals to local men, women, and children whose lives have been affected by AIDS. Laurie got the idea to start the organization while volunteering at a food pantry that catered to those living with HIV. During her time as a volunteer, Laurie realized that many of the people who visited the food pantry eventually became too ill to cook or shop for themselves. So, with the help of some friends, Laurie created “Mama’s Kitchen,” which she named in honor of her mother Edie.

As an organization, Mama’s Kitchen believes that “every person is entitled to the basic necessity of life – nutritious food.” To achieve their vision, the organization delivers three meals a day, seven days a week, to people in San Diego who are living with AIDS. In doing this, Mama’s Kitchen is able to provide “food, compassion, and hope to over 1,300 people annually throughout San Diego County.” 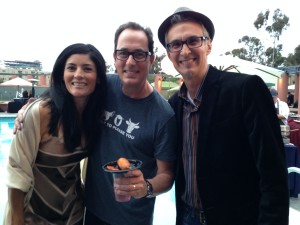 Mama’s Kitchen has grown quite a bit throughout the years. By 1999, the organization was able to provide 100% of their clients’ nutritional needs. They have since created the Children’s Nutritional Health Program, which focuses on delivering meals to clients’ children free of charge. As of 2006, the organization’s board of directors decided to expand its services to include cancer patients. In March of 2012, Mama’s Kitchen delivered its six-millionth meal.

As Mama’s Kitchen continues to expand its services, they’ve begun to experience a record breaking number of visits. Unfortunately, donations don’t always keep up with the organization’s growing client base. At Greater Good Realty, we’re doing everything we can to help. Last Friday, we had the privilege of participating in the twenty-third Mama’s Day fundraising event, which, like every year, was a huge success.

For this year’s event, Mama’s Kitchen brought together over 55 top local chefs, restaurants, and caterers to the Hyatt Regency in La Jolla. Local chef and television personality Sam “The Cooking Guy” Zien was on hand as this year’s culinary host, and, as usual, he did not disappoint. In addition to the delicious food and wine at the event, there was a silent auction and opportunity drawing to help raise the funds necessary for Mama’s Kitchen to continue its community outreach.

To find out what you can do to help, visit Mama’s Kitchen online and check out their Virtual Food Drive. To learn more about what Greater Good Realty is doing for the community, give us a call at 619-GREATER (473-2837) or go to greatergoodrealty.com/giving.