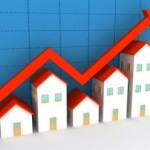 Although it may seem like home prices in San Diego have already hit their ceiling, there is still some room for growth. According to Beacon Economics, a Los Angeles-based research and consulting firm, the median price for a resale single-family home in the San Diego area will surpass the pre-recession peak of $571,000 in about four years.

When discussing San Diego’s economic future, Beacon focuses on the positive. “We expect the population to continue to rise at a modest pace, per capita incomes will continue to grow as well, and the labor markets will continue to improve,” explained Jordan Levine, director of Economic Research for Beacon. “We’re undersupplied on housing as is the rest of the state from a historical perspective. So prices should continue to rise in the absence of some external shock.”

In 2013’s fourth quarter, the median price for a single-family resale home was $453,000. Even though that’s a 15.5 percent gain from the same period a year ago, it’s still 21 percent below the pre-recession peak of $571,000. That record, which was set in the first quarter of 2006, should be topped in few years, albeit at a much slower rate. If everything goes as expected, annual price growth should slow to 6 – 8 percent over the next year, and to 4 – 6 percent after that.

With prices continuing to level out, many experts believe that San Diego’s real estate market is well on its way towards a return to normalcy. “The period where investors bought up the ‘bargain’ properties has largely passed now that prices have appreciated back up to more normal levels,” Levine said. “We expect the market to begin shifting back to the retail owner-occupied market over the next year, so growth will be driven more by income growth rather than speculative buying or investor-driven sales.”

A piece of property from Otay Ranch’s master-planned community was recently sold to Moller Otay Lakes Investment for $21 million. The lot, 13 A, is located in eastern Chula Vista and overlooks Otay Lakes. In a about two years, after development details for the property have been completed, the buyer plans to start construction on a new project of 1,007 homes.

East of the newly acquired property is Village 13B, which is overseen by Baldwin & Sons. Like it’s neighboring lot, 13B is scheduled to be used for both residential and commercial purposes. As of now, the development is projected to include around 900 homes, a 200-room resort hotel, and up to 20,000 square feet of commercial space.

If everything goes as planned, the development by Baldwin & Sons will be built about one or two years after the project at 13 A begins. Currently, both properties are located in unincorporated land and require approval from the county before any construction begins. “We know we have demand because of population and household growth,” Stephen Haase, Baldwin’s vice president for forward planning, said, “but it will be more measured than in the 2000’s.”

Otay Ranch, which started being developed in the 1980’s, is currently about half way towards completion.