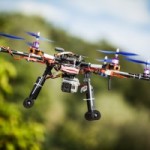 In order to get a perfect picture of the ranch house at 17124 Calle Corte, which is listed for $3.975 million, 3SixtyStrategies spent an entire afternoon taking ariel photographs of the area. The pictures, believe it or not, weren’t taken from the inside of a plane or helicopter. Instead, they were shot with an unmanned drone.

As the technology has become smaller and more affordable, the use of drones has begun to expand into the commercial world. Businesses of all types have already started experimenting with the unmanned aircraft, all in the hope that the new technology will open new avenues for revenue. Even the real estate sector has started to find ways to use the flying devices, and although their use is still in its infancy, the results seem promising so far.

Jim Young, CEO of RealComm, a Carlsbad-based real estate technology company, said he sees drones becoming a billion dollar industry for the real estate sector. To Young, drones offer a cheaper, more versatile alternative to taking aerial photographs from a helicopter. However, when it comes to regulations, there is still quite a bit to work out.

At the moment, the Federal Aviation Administration (FAA) is appealing a court ruling that eliminated the agency’s restrictions on the commercial use of unmanned vehicles. Even though the case is still pending, John Villasenor, a professor of electrical engineering and public policy at UCLA, said he believes the FAA will eventually create rules to govern the use of drones for commercial purposes. “I think drones have the potential to be applied to real estate for properties at many different price points,” Villasenor explained. “A few years from now, it will likely be common for property websites to include a few pictures taken from a drone.”

For 3SixtyStrategies owner Sergio Gonzalez, the use of drone photography to sell homes is just the “icing on the cake.” Gonzalez, who subcontracts the drone he uses from Aero Optics, said he’s done around 20 homes in the last year, ranging in asking price from $800,000 to $12 million. While a service such as this may not be an option at every price range, there are other, cheaper alternatives. A Phantom quadcopter drone can be had for as little as $480 on Amazon.com. With a Go-Pro camera attached, any realtor can get unique, aerial shots of their client’s home.

Throughout the past year, a group of Marina District residents have been in discussions with both the city of San Diego and the Metropolitan Transit System (MTS) regarding the negative impacts of the Quiet Zone Project. Although progress was difficult at first, things began to change when Interim Mayor Todd Gloria took office.

On September 10, 2013, the Interim Mayor wrote a letter to Paul Jablonski, the Chief Executive Officer of the San Diego Metropolitan Transit System, addressing his constituents’ concerns about the area’s bell noise. After the letter was discussed by the MTS Board of Directors, Wayne Terry, who works as the Chief Operating Officer of the Rail Division, became personally involved.

Thanks to the cooperation of Metropolitan Transit System, a great deal of progress has been made in addressing the concerns of Marina District residents. However, as always, there is still a lot to be done. Here is a list of the items that are currently up for discussion:

3. Lower the bell height: Lowering the height of the bells will reduce the amount of ambient noise they produce.