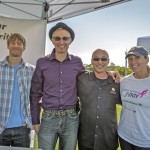 Earlier this week, Greater Good Realty was featured in an edition of San Diego Downtown News. The monthly paper, which specializes in community news, business briefs, entertainment calendars, and editorials, ran a story about Greater Good Realty’s commitment to giving back to San Diego.

“We stated from day one that we want to be the first real estate company to be able to donate more than $1 million to charity,” Greater Good Realty founder David Stone explained in the article. Up to this point, Stone has only been at it a couple of years, and although his company still has a ways to go to reach the $1 million mark, they’ve definitely started to make a difference. “We contributed tens of thousands of dollars, slicing off and donating from every [real estate] transaction. We’ve put $10,000 into our donation account so that when we stumble upon organizations like Photocharity, we’re able to donate.”

Photocharity, which happens to be one of Greater Good Realty’s favorite causes, is an organization that raises awareness and funds for charitable groups that empower young people to make better choices. Over the past 12 years, Photocharity has turned its focus to helping San Diego’s population of homeless and disadvantaged youth. Through fundraising events, public outreach, and music and photography programs, Photocharity is doing everything it can to make sure young people in San Diego don’t go without shelter or food. Without sponsors like David Stone, their work simply wouldn’t be possible.

“David Stone has got a big heart,” Photocharity founder Jeffrey Sitcov said. According to Sitcov, Stone is one of 40 or so “angels” that make Photocharity’s work possible. “He [Stone] actually went to the walk we had last year and was very touched listening to homeless youth speaking. He said, ‘I want to help more.’ Now he’s one of our major sponsors.”

When Greater Good Realty was created, Stone and his wife Monica decided they would give 10% of their earnings to charity. Over time, they hope that number gets even bigger. “Will it go up in the future? Hopefully. Will it go down? Hopefully not,” Stone said. “It’s just a good solid number that people will recognize and know that it’s not nickles and dimes, that it’s real dollars that are going back to the community.”

Currently, Photocharity is preparing for a big fundraising gala scheduled for May 3 at 5:30 p.m. at the Del Mar Hilton Hotel. To learn more about Photocharity and its upcoming events, visit photocharity.org.

For more information on what Greater Good Realty is doing for the community, check out our website or give us a call at 619-GREATER (473-2837).