At Greater Good Realty, we care about what happens in our community. And we aren’t just saying that. Every year, we donate 10% of our commissions to various charitable and nonprofit organizations throughout San Diego.

Recently, we had the pleasure of participating in Photocharity’s National Walk & Concert to Save Homeless Youth. The event, which is in its fourth year, took place last Saturday at Liberty Station’s NTC Park.

Over the past eight years, Photocharity has dedicated itself to saving and empowering homeless youth. The organization’s vision, according to its website, is “to break the cycle of youth homelessness for 12-24 year olds in San Diego by raising awareness and partnering with successful shelters and organizations.” By working with partners in the community, Photocharity hopes it will be able to provide a “light and example for other communities to follow.”

Photocharity raises awareness and funds for its causes by putting on concerts, photography exhibitions, and public speaking events. The organization also donates all of the money it receives from selling signed sports and music memorabilia. That’s actually how the group got its moniker – the name Photocharity is a tribute to the relationships the organization formed while photographing athletes and musicians. Since its inception, Photocharity has raised over $600,000 from the sales of signed memorabilia.

Currently, the majority of Photocharity’s fundraising goes to the Storefront homeless shelter. The shelter, which is run by San Diego’s Youth and Community Services department, is the only one in the area that houses teens ages 12-17. That’s a pretty big deal, especially when you consider that there’s an average of 2,000 homeless teenagers living in San Diego on any given day. 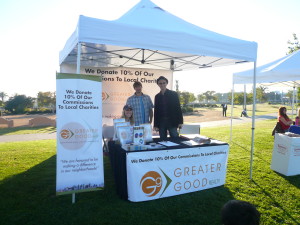 Taking Music to the Streets:

An important part of Photocharity’s work in helping homeless youth is its weekly Taking Music to the Streets program. Every Sunday, the organization offers free music lessons, instruments, food, and clothing to homeless and disadvantaged teenagers living throughout San Diego.

The program, which began in 2003, has helped teach hundreds of kids how to play an instrument and has resulted in teens writing over 50 original songs. It even inspired a group of young teenagers from the Storefront to start their own band. You can see the TNT Band (Tuesday Night Teens) performing at Photocharity concerts and events.

“Basically, this music program is about giving us inspiration,” said Taking Music to the Streets participant Austin Hansen. “I keep coming back because I love the guitar lessons and keep learning things.” Austin, 17, was a featured speaker at this year’s National Walk & Concert to Save Homeless Youth. He has been homeless since June.

Proceeds from this year’s event will be used as seed money for a new homeless shelter called the House of Hope. Photocharity plans to use the new shelter as a safe haven for homeless youths between the ages of 18 and 24. Before this Saturday’s fundraiser, Photocharity had already raised $200,000. To make the House of Hope a reality, the group will need to raise around $1 million.

Jeffrey Sitcov, founder and president of Photocharity, says the goal of programs like these is “to break the cycle of youth homelessness.” “These kids don’t want to be homeless. Many of them are thrown out on the streets and have no skills. The response we’re getting from kids (who attend Taking Music to the Streets) is amazing. When they first come in here, they don’t even want to look you in the eye. After a few visits, they hug you.”

For more information on how you can donate to Photocharity or its partners, visit www.photocharity.org.

To find out more about what Greater Good Realty is doing for the community, check out our blog.