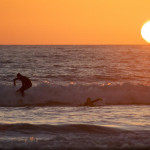 Do you enjoy surfing?

With the winter swell approaching, now is as good a time as ever to head out to the beach. There are a bunch of great surf spots throughout Southern California, many of which are right here in San Diego. Whether you’re a beginner or have been doing it all your life, surfing is a great way to enjoy California’s beaches.

Tamarack – Some of the area’s most popular surf breaks sit at the end of Tamarack Avenue, near the Agua Hedonia lagoon jetty. Spend some time getting to know the breaks before you paddle out, especially when the big waves start rolling in. This beach, like many others in the area, can get pretty crowded during certain seasons.

Imperial Beach Pier – This beach has good mid and high-tide rides on both sides of the pier. It does, however, tend to get rather crowded when the surf is up. Be sure to check the water before going into the ocean, as ocean pollution from Mexico can sometimes be an issue.

Ocean Beach Pier – Ocean Beach is a great spot for beginners. Although it can get pretty crowded, it’s a very friendly place to surf. The main beach break, which is just north of the pier, has actually been set aside for “surfers only.” If you don’t have your own equipment, rental boards are available from the nearby OB Hostel.

South Mission / Pacific Beach – This stretch goes from the Crystal Pier to the Mission Bay Jetty. It includes more than two miles of beach breaks that are appropriate for a wide range of surfers. During tourist season, this stretch can become quite crowded. There is plenty of parking, however.

Sunset Cliffs – This beach is generally for more advanced surfers, who have no problem telling less experienced participants to get out of the way. There are coves throughout the beach, which create unique breaks that seasoned surfers love. Unfortunately, there are also large rocks scattered along the beach, which can make surfing this spot a little dangerous.

Windansea – Windansea sits among a series of reef breaks between Bird Rock and La Jolla. It has become a pretty well known spot, largely because of its surf shack and big barrel waves. Numerous pro surfers also happen to call this area home. This beach is best left to locals and experienced surfers, as it has a lot of rocks and a powerful crash zone.

For more information on where to look for surf spots in Southern California, including real time video of beaches, check out www.surfline.com.