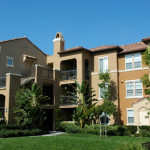 Apartment rent in Southern California is on the rise:

If you’re looking to rent a new apartment, now might be a good time. According to a study by the University of Southern California’s Lusk Center for Real Estate and the California Association of Realtors, residential rents are expected to rise throughout the next two years.

In Los Angeles County, rent prices climbed to an average of $1,435 a month, which, according to the 2013 USC Casden multifamily forecast, is up 2.9% from last year. Although rent prices throughout the region saw gains as well, Los Angles County saw the biggest increase among the four major Southern California markets.

Even though rent has been rising throughout Southern California, home sales in the region are still outpacing their gains. The median price for houses and condominiums sold last month was $385,000, which, according to DataQuick, is up 25% from last year. The average price for home sales, which has remained largely unchanged in the past three months, is the highest it’s been since April of 2008. Rent prices in the region have also been rising, though not quite as fast. In San Diego, rent has risen 2.8% to an average of $1,388 per month.

The shortage of apartments throughout the Southern California region has been a major factor in the area’s rent increases. In Los Angeles, Orange, and San Diego Counties, about 6,700 new units were completed by June 30. During the same period, a total of 11,900 apartments were rented.

“Despite marked improvements in employment and the overall economy, the rapid increase in home prices and interest rates are pricing first-time buyers out of the local market,” explained Richard Green, director of USC’s Lusk Center. “As more and more of these households become renters instead of buyers, we will continue to see fewer vacancies and higher rents.”

It looks like San Diego is becoming pretty hot in the apartment investment world. According to Meyers Research, the city ranks 9th out of 28 on its multifamily investment index. San Diego’s score of 6.4 puts it near the top of the list, both nationally and in California. That’s pretty good, especially when you compare it to the 7.6 score given to the number one city on the list, San Francisco.

San Diego’s low vacancy rate has been a big contributor in keeping rent prices high. The USC Lusk Center for Real Estate Casden forecast found that the vacancy rate in San Diego has dropped to “an almost absurd 2.3%.” “Overall, these dynamics point to an increase in the demand for multifamily rental housing and a tightening rental market,” explained Casden. According to the report, the vacancy rate for San Diego is expected to drop to 1.9% in 2014 and to 1.6% in 2015.