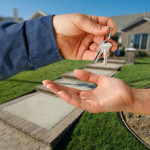 It looks like home prices in San Diego are continuing their climb. According to reports released Tuesday by the S&P Case-Shiller Home Price Index, the value of local homes has risen 17% since May of 2012. That’s the first time the market has reached those levels since the lead up to the housing bubble in 2008.

The housing data from May marks the fourth consecutive month of double-digit annual growth for San Diego County. The area, which has been on the upswing for quite a while now, has seen double-digit increases in its home values since February of this year. That month saw an annual gain of 10%, which was the first time San Diego’s Home Price Index reached double figures since the housing crisis began. Now, San Diego ranks among the nation’s hottest real estate markets.

The news was good for the rest of the country too. All 20 of the cities tracked in the index experienced annual gains. A dozen cities saw double-digit growth, with the biggest increases coming in San Francisco (24.5%), Las Vegas (23.3 %), and Phoenix (20.6%). Even some of the harder hit areas of the country are seeing their home values rising. Dallas and Denver, which had their pre-crash peaks set in 2006 and 2007, saw home their values rise 8% and 10% respectively. Altogether, prices are up 12% when compared to a year ago.

All of this should be good news for homeowners who are looking to sell and for those who are underwater on their mortgage. Would-be buyers, on the other hand, may find that now isn’t the most affordable time to buy a house.

When Faith McNeilly saw the four-bedroom, three-bath home in San Marcos, she knew it would be a perfect fit for her family. So, along with a solid offer by her parents, the 11-year-old sent the house’s owner a handwritten note. As it turns out, that letter made every difference.

Letters to homeowners, sometimes referred to as “love” letters, are fairly common in the real estate industry. These notes, which are usually penned by agents or their clients, are meant to create a personal connection between the homeowner and potential buyer. Getting one from a 11-year-old kid, however, is a bit unusual.

Believe it it or not, the idea for Faith to write the letter came about pretty naturally. After Faith and her family visited the home in San Marcos, they couldn’t stop talking about it. That’s when their real estate agent had the idea for someone in the family to write the homeowners a letter. “Faith went home, did her homework, wrote the letter,” explained Cathy McNeilly, her mother. “I didn’t tell her what to write, and it really comes across… it’s very genuine, and I’m proud of it.”

Faith began her letter by telling the homeowners just how much she loves the house. “I love your house because it is the perfect house for my family,” reads the letter. “The number one reason I’d love to live in your house is because I go to San Elijo Middle School and am only in the sixth grade. You may not know this, but your house would allow me to go to San Elijo Middle School. I’d love to spend the rest of my middle school years with the friends I’ve made living here in the past 3 years.”

The 2,200 square-foot home, located near California State University San Marcos, received multiple offers, but, thanks in large part to their daughter’s letter, the homeowner decided to sell to the McNeillys. The home sold for $530,000.